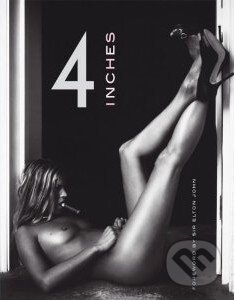 Dressed in nothing but Jimmy Choo spikes and a piece of Cartier jewellery, a constellation of beautiful, successful and empowering women bare all in this long-awaited book Four Inches...

Dressed in nothing but Jimmy Choo spikes and a piece of Cartier jewellery, a constellation of beautiful, successful and empowering women bare all in this long-awaited book Four Inches. The size of the heels they wear, Four Inches features Christina Aguilera, Rachel Hunter, Lara Flynn-Boyle, Rebecca Romijn-Stamos, Jodie Kidd, Victoria Beckham, Kate Moss, Macy Gray, Geri Halliwell, Serena Williams, Minnie and Kate Driver, Elle MacPherson, Tamara Mellon, Sophie Dahl, Anne Heche, Mimi Rogers, Pamela Anderson, Yasmin Le Bon, Sarah Ferguson and many more. All the pictures are taken by women too, in fact some of the world's best female photographers including Mary McCartney, Pamela Hanson, Sam Taylor-Wood and Ellen von Unwerth. A collaboration between Jimmy Choo and Cartier, Four Inches is a book for women, about women and by women. 10% of the proceeds from this book will go to the Elton John AIDS Foundation who will make sure that it gets to women and girls in Africa who are infected with HIV/AIDS. JIMMY CHOO Launched in 1996 by Tamara Mellon, Jimmy Choo, the makers of glamorous shoes, handbags and accessories favoured by female stars and elegant women, now has over 20 stores worldwide. The idea for this book came from Tamara Mellon who wanted to be able to use her company to help ease the suffering of women and children in Africa. CARTIER Founded in 1847 by Louis-Francois Cartier, the famous French watchmakers and jewellers agreed to sponsor this project after being approached by Jimmy Choo. They also provided all the jewellery that appears in the book. ELTON JOHN AIDS FOUNDATION Established in 1992 by Elton John, the Foundation is primarily concerned with increasing awareness, providing funding for educational programs and eliminating prejudice against HIV/AIDS infected individuals. Their work is worldwide.
Čítaj viac
Našli ste v našom obsahu nejaké nepresnosti?
Dajte nám o tom vedieť.
Nahlásiť chybu