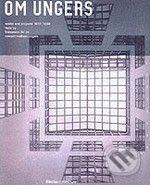 This text covers a key period in the career of Oswald Mathias Ungers, one of the most important German architects. The book focuses on the point in his career when he was invited to participate ...

This text covers a key period in the career of Oswald Mathias Ungers, one of the most important German architects. The book focuses on the point in his career when he was invited to participate in some of the most important international competitions and when he built many of his most noteworthy public and private buildings, including the Residence for the German Ambassador in Washington DC. In addition to a thriving architectural office, Ungers has taught at a variety of institutions in Europe and the United States.

Ungers is one of the most important German architects of the last 50 years. Born in 1926, he opened his first office in Cologne in 1950. Then he began a very intense professional career in Germany and beyond and has taught at the Technische Universitat in Berlin, Cornell University, where he was appointed director of the architectural department, the Harvard University and the University of California.

The book is prefaced with an introduction by the well-known Italian critic Francesco Dal Co', who underlines the power of geometry in Ungers' architecture. This is followed by a general text by Marco de Michelis. Statements on architecture by Ungers himself close this text section.

The following section, related to the project descriptions, is divided in two parts: the first presents 19 competition projects starting with a series of urbanistic proposals for different areas of Berlin conceived at the beginning of the 1990s, through to one of his most important buildings the project for the Museum Wallraf-Richartz, in Cologne, conceived in 1996, in collaboration with the artist Hamilton Finlay. The second part of the book presents 21 realized projects illustrated with colour photographs, accompanied by a series of sketches and technical drawings, from the villa for the German Ambassador in Washington, to Ungers' own house in Cologne, one of the most successful achievements of his career. The volume ends with a complete list of Ungers' projects, from 1951 to 1998, each one illustrated with an image.
Čítaj viac
Našli ste v našom obsahu nejaké nepresnosti?
Dajte nám o tom vedieť.
Nahlásiť chybu