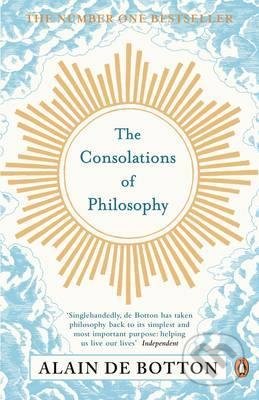 The Consolations of Philosophy

Alain de Botton's (henceforth, 'Alain') opus minimus has achieved three remarkable things. It has made philosophy popular, it has made philosophy fashionable, and, most remarkable of all, it is not completely awful. The book, as everyone by now must know (after the TV series, which evidently precedes and creates the book), is a series of vignettes - 'episodes' - in which Alain ponders how a select few, fairly ancient, philosophers, might address a few key personal problems. Being unpopular, being poor, being unloved, and so on. Not on the face of it, a particularly clever idea. But then, no one else seems to have thought of doing it, so Alain must have what in Internet terms is called 'first mover' advantage. His book may not be all that good, and doubtless will spawn a batch of hopping, croaking competitors, but it is unlikely to be overshadowed. And actually, at least by the standards of philosophy books, it is very readable. The usual deathless philosowaffle that characterises ango-american philosophy has been ruthlessly pared to a minimum, making room for the an eclectic and, it must be said, frequently irritatingly banal, series of pictures of chocolate milk and old-paintings-with-a-philosophical-flavour. But, at least the book has 'narrative flow'. Indeed, it has some style. How good is the philosophy? I read the chapter on Nietzsche with interest. Alain deals with the suggestion that Nietzsche was in fact a very nasty bit of work (he wanted most people to suffer and die so that they could contribute to the amusement of an elite - which would consist only of men, women being an inferior species) is swiftly disposed of by attributing all the nasty bits in Nietzsche's writings to (implausibly) his sister.

A picture of whom, greeting a Mr Hitler is interposed in to the text to underline the point. Socrates is portrayed as a noble creature misunderstood by his contemporaries, and piquantly made to drink hemlock. The moral, Alain explains, is not that it is important to be popular, but it is important to be right. In fact, Alain suggests, to be logical. Now this is overstating the logic of Socrates' own approach. Aristotle maybe, would have appreciated this epitaph. But Socrates is above all, a romantic, who believes in 'the power of the Good'. Happily, Alain comes back to this question later in the book, and redresses the balance. Indeed, frequently, the philosophers are produced, made to put forward a firm position, only for the contrary assumptions to reappear in later chapters. But then, the attention span of a TV viewer is only ten minutes, and that is the origin of this particular work. it may be weak, platitudinous and intellectually pompous, but it is also a very good read.
Čítať viac