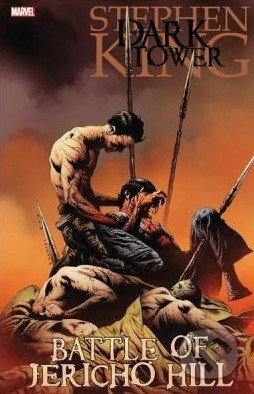 The Battle of Jericho Hill

The world has moved on. Nine years gone since the gunslingers protected the land. Nine years gone since the fall of Gilead, when the Good Man's dark army brutally took the ancient city from those same gunslingers and pushed them into the wilderness beyond. With the Affiliation busted, it's been a time of retrenchment for roland and what remains of his ka-tet, hiding and on the run from marauding mutants and Farson's mercenaries. But now, with the revelation that one of the Beams that support the Dark Tower is broken, things couldn't possibly be any worse: First Roland's homeland, and now Mid-World itself, are on the brink of destruction. The Dark Tower series concludes with a final showdown between darkness and light at Jericho Hill!
Čítaj viac
Našli ste v našom obsahu nejaké nepresnosti?
Dajte nám o tom vedieť.
Nahlásiť chybu